This artwork is signed within a limited edition of 300 copies through the world!
Fine art photography | Themes | Documentary | Politics | Martin Luther King on the Washington Esplanade in 1963 Photography 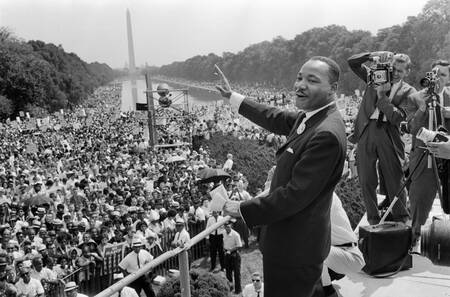 On August 28, 1963, Civil Rights Leader Martin Luther King salutes supporters on the Washington Esplanade (the Washington Monument in the background) during the "Walk on Washington." King said that this march was "the greatest manifestation of freedom in the history of the United States." Martin Luther King was murdered on April 4, 1968 in Memphis, Tennessee. James Earl Ray confessed to shooting him and is sentenced to 99 years in prison. The assassination of King shocked the American society of the time and is still considered a milestone in the history of the United States.

The Agence France-Presse (AFP) is a global and general press...

See all photos from Agence France-Presse