This artwork is signed within a limited edition of 30 copies through the world!
Fine art photography | Themes | Portrait | Couple | How I long I had a picture of you 9 Photography 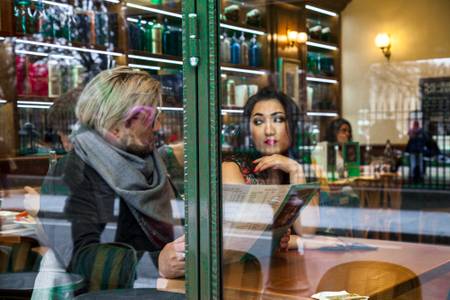 How long I had a picture of you I had just experienced the end of a decade of Parisian love story. So I leave the city to forget and alleviate grief. As if she was entirely driven out by this love. Arriving in Teheran I meet a poet who expresses his experience resembling mine in the form of a poetry journal named "How long I had a picture of you". I could clearly hear my story in these poems. Then a little later I return to Paris to photograph the trace of this newspaper to my taste and imagination. Paris still has its romantic magic and its essential architectural role in the love stories that are formed or developed in this city. Like the rest of the urban elements of Paris present in the card, the main actors often have a still and fixed look. They are like the monuments and the rest of the objects of the city, only testifies to this love story being evaluated. They have no power or the ability to control the path of this love on which they are led to an unforeseen and ambiguous end. Hypnotic by the provision of this city, they allow themselves to be led by this magic. They become a status of Paris' reputation as the city of romance, love, life. "How long I had a picture of you" is a tribute to Paris and its romantic reputation of love stories like this one.

Keywords used by Sajede Sharifi to describe this photograph: Paris

This photograph is part of a limited edition of 30 copies worldwide.

See all photos from Sajede Sharifi